An excerpt of the pilot version of the performance No Coming No Going (Ni prihajanja in odhajanja) by Jatun Risba that occurred at Modri Kot (Tovarna Rog, Ljubljana, Slovenia) on the 1st of November 2016. The performance was part of the event Luknja v novcu (“A Hole in the Coin”) that was dedicated to Aleš Kermauner (a fabulous Slovene poet who committed suicide at 19 in the ’60s) and to all other people who killed themselves. The aim of this event was to create a meaningful, magic evening that would add enough sense, beauty and value to our existence to chase away any thoughts, or attempts of suicide, forever.

The body & eye movements and the use of finger/nail extensions are inspired by Balinese traditional dances. The chant functions as a choral mourning song that wants to shed away the pain and the tears of those who suffered from suicide (Slovenia has a peculiarly high suicide rate).

Further developments and executions of the performance will be scheduled in 2017.

My lecture about Eugenio Barba & Odin Teatret performance The tree at the Academy for Theatre, Radio, Film, and Television (AGRFT) in Ljubljana is on YouTube:

On the 6th of January 2017 Jatun Risba performed “Vračanje” (Return), an art intervention that took place in front of the Ljubljana Cathedral in Ljubljana, Slovenia.

The performance embodies the return of “the outlaw”: the selves, who the society and the culture we live in refuse to acknowledge and validate. What looks like a Via Crucis, turns out to be a flight of an Unmanned aerial vehicle (UAV), a combat drone. The tied double, represented by the mannequin head, questions how our planet would be like if humans suddenly disappeared. By openly exposing vulnerability in public places, the author aspires to generate a wormhole that embraces the left out, for an alchemical process of healing. 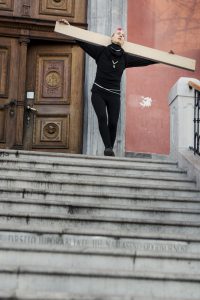 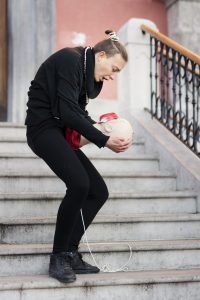 More photos of the performance are available here. The photos were made by Tadej Čauševič. His website is: http://tadejcausevicphotography.com/